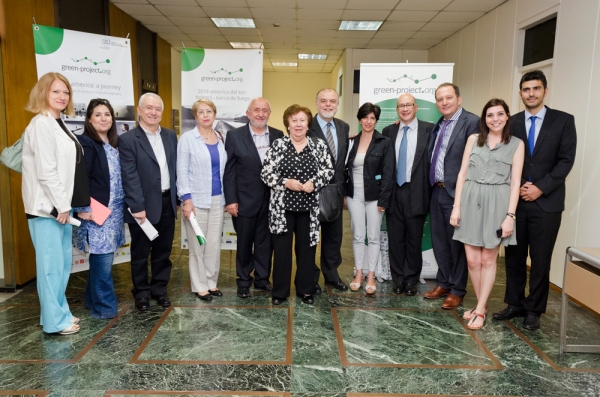 Extension until 30.07.2015 οf the duration of the Environmental Photography Exhibition “Green Project in South America: A journey” Michael Cacoyannis Foundation

Re-live the Green Project journey in South America via facebook

In the presence of a large audience -despite the extreme for the season, weather conditions (which many attributed to climate change)- in 5 June 2015, took place in the Ministry of Foreign Affairs (1, Academias Str., Athens, Greece), the One-day Conference for the celebration of World Environment Day 2015, entitled “Showcasing Challenges and Opportunities for Sustainable Development in Greece”, which was co-organised by the Hellenic National Commission for UNESCO and the Green Project NGO. Among the many distinguished speakers, the President of the Hellenic National Commission for UNESCO, Ms Aikaterini Tzitzikosta, the Special State Secretary for Water, Ministry of Production, Reconstruction, Energy & Environment, Mr Jacques Ganoulis, the Professor, Member of the Academy of Athens, Christos Zerefos and the President of the Green Project NGO & Attorney at Law at the Supreme Court, Regulatory Authority for Energy, Dr Yannis Tzortzis, invited all the creative forces of the country to join their efforts for the immediate exploitation of many, despite the economic crisis, opportunities existing in Greece, for a sustainable future.

In the evening of the same day, at the Michael Cacoyannis Foundation (206, Piraeus St., Athens, Greece), with admittedly "monstrous" success, due to the massive influx of enthusiastic spectators, who pushed the capacity of the large gallery-hall to its limit, the Vice-President of the Foundation Ms Xenia Kaldara inaugurated the Environmental Photography Exhibition “Green Project in South America: A journey”. 13 Green Project travelers participate: Dr Tilemachos Andrianopoulos, Mr George Asimakopoulos, Ms Katerina Charterou, Ms Sofia Dassyra, Ms Vasiliki Kassoumi, Dr Aggelos Katsaggelos, Mr Dimitris Kouletsis, Ms Ioanna Lemoni, Dr Yannis Tzortzis, Ms Athanasia Varaki, Mr Kostis Vardas, Dr Simoni Zafiropoulou and Ms Dimitra Zirou. The exhibition is curated by Mr George Asimakopoulos. The 33 photographs of the exhibition have been taken by the participants in the Green Project 17,135 km road-trip from Bogotá to the Land of Fire, lasting 52 days and crossing 8 countries (Colombia, Ecuador, Peru, Bolivia, Brazil, Uruguay, Argentina and Chile). From 19 July until 7 September 2014, the travelers recorded 61 green points of interest in relation to geo-diversity, bio-diversity, renewable energy sources, and the UNESCO World Heritage Sites, together with aspects of the everyday life. In the context of the exhibition, the trailer of the official documentary of the journey, directed by Ms Dimitra Zirou, is on show. The journey in South America was declared "One Success Story 2014", by the Hellenic National Commission for UNESCO, which has put under its auspices the Green Project journeys. Due to the persistent demand by the public who have been visiting the exhibition non-stop, since its opening, the duration of the exhibition has been extended until Thursday 30 July 2015. Daily: 18:00-22:00. The entrance is free.

From today until the beginning of September 2015, one could re-live daily the Green Project journey in South America, via facebook:https://www.facebook.com/pages/green-projectorg/438796516141778?ref=hl

We believe in the power of photography to change the world